How to add your songs to Genius

Home » Guides & Advice » How to add your songs to Genius

Anyone can add a new song by clicking the “ADD SONG“ link at the top of the page. Note that the ‘ADD SONG’ function is currently only available on desktop.

How to Create a Page

Selecting the Correct Genre for Songs

As you’re selecting a genre tag for song pages, only use Rap, Pop, Rock, Country, or R&B. When a user isn’t sure about the style, it’s a common mistake to select “X” as that should never be used for music. In this case, use your best judgement to decide what the core genre is. For example, Electronic music is normally Pop. You can always add in another tag like Rap once the page is created if the song contains different elements.

How To Format Lyrics

The latter is much more readable, and makes for a better representation of the next-level content that Genius strives to offer.

Always use apostrophes when writing contractions. When writing a contraction, always place an apostrophe on the side of the word that letters were removed from. For example:

Transcribe all lyrics as the artist says them.

Since we transcribe as the artist pronounces their lyrics, if the artist doesn’t pronounce the “G” at the end of the word then it shouldn’t be in the lyrics.

This ties in with the previous commandment,

See how on each even number there is normally a snare/clap? The same applies for most songs. If you can break a song down like this, it’ll be a lot easier to transcribe evenly.

I drink a Boost for breakfast, an Ensure for dessert
Somebody ordered pancakes, I just sip the sizzurp

“Breakfast”, “Dessert”, “Pancakes”, and “Sizzurp” are all said on the snare, thus breaking the lines down as follows:

1I drink a Boost for 2breakfast, 3an Ensure for 4dessert
5Somebody ordered 6pancakes, 7I just sip the 8sizzurp

Keep in mind that long lines of text makes it harder for the reader to understand where each line stops, the rhyme scheme, etc. This is even more pressing when considering most of Genius readers read lyrics from their mobile devices.

When there is more than one artist on the track (not including producers!) you can add an artist identifier to each section header. This is unnecessary for songs with just one vocalist (but if it’s a solo track on a group project include the artist in the ‘Vocalist’ song facts field). Example:

When multiple artists have vocals in the same section of a song, italicize the second artist’s name:

Make sure to also italicize their portions within that part of the song—this will help readers distinguish who’s saying what. If there’s a third vocalist, you can include their parts in bold. To make text italicized, enclose the desired text as follows:

Section headers should always be written in the same language as the transcribed text.

Note: always use “chorus” instead of “hook”—the chorus is the central, repeated theme of the song, while the hook is the part that’s intended to stand out and grab the listener’s attention.

For example, take Trinidad James’ “All Gold Everything”—the chorus is:

While the hook is:

Use standardized spellings. As Genius aspires to be an interactive guide to human culture we host an array of slangs and colloquialisms—some of which don’t have a definitive source or spelling. As this is the case, below are some Genius preferred spellings:

Reasoning: As it’s a contraction of “I am” or “I am going to,” proper English dictates there must be an apostrophe in contracted words to indicate missing letters.

Reasoning: “‘cause” is a shortening of because and is also a conjunction, while “cause” is a noun and an entirely different word.

Reasoning: ‘til is a contraction of “until” so it requires an apostrophe, and until was originally derived from till. Onsite the Americanized spelling is ’til, and the British English spelling is till.

Reasoning: “Tryna” is derived from “Trying to.” Since there’s only one “N” in the original words, we shouldn’t add in another one.

Reasoning: Unless you’re referring to a pirate, you shouldn’t use “aye.”

Reasoning: Unless you’re referring to a garden tool, you shouldn’t use “hoe.”

On tracks by artists that use British-English or American-English, please transcribe in their respective variation of language. It’s no good transcribing a British song for a British audience if you’re utilizing American spelling, and vice versa. See this page for more information regarding the differences in American/British spelling.

We use the typewriter versions of these characters for two reasons: 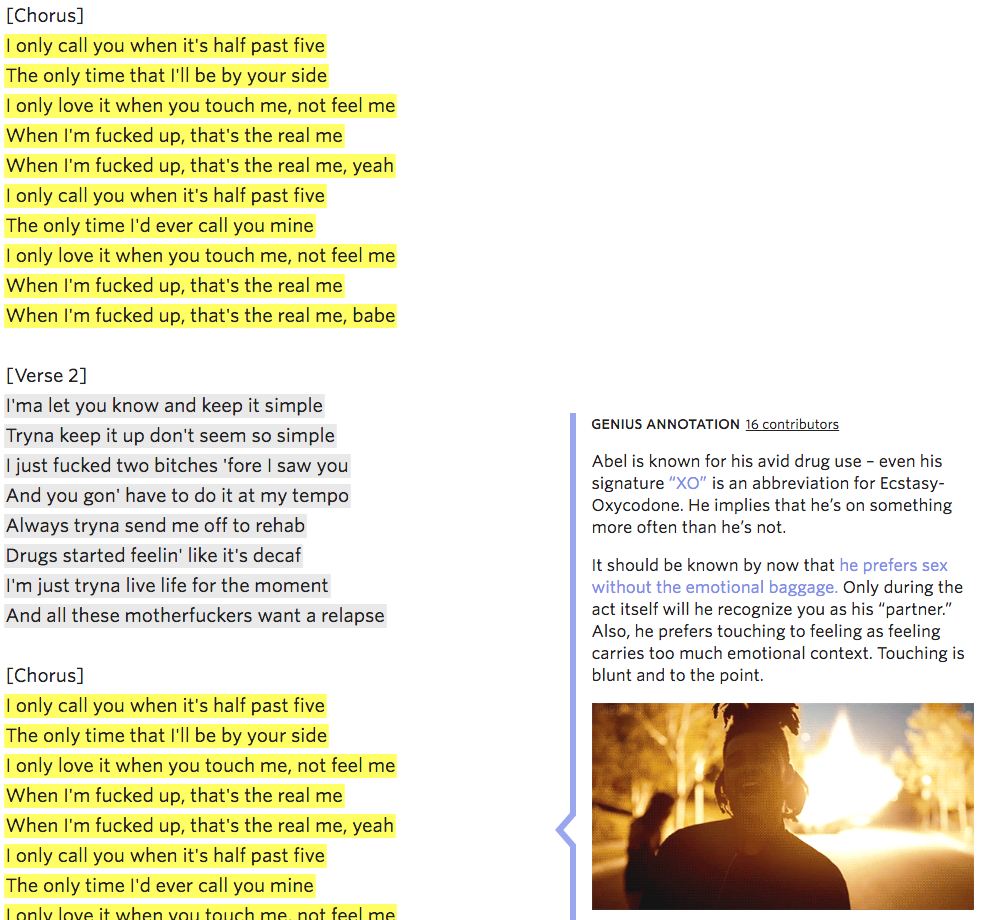 We also use this practice when lyrics are repeated within a section of a song. 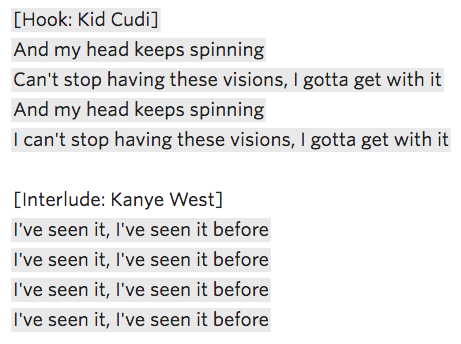 Why should we do this? Imagine you’re just reading through lyrics and you get to a hook. You’ll have to scroll all the way back up, find the first hook, then scroll down and try to find where you were once the song transitions. We want to eliminate this struggle and make things easier for our users.

If you come across a page that hasn’t been updated, it’s easy to update: just copy and paste the lyrics into each reoccurring section. If you run into a page with verified lyrics that you can’t edit, send a message to a staff member and it’ll get taken care of.

When copying and pasting lyrics, as in a repeated chorus, be sure to grab the original lyric and its annotation number—found in parentheses at the end of each line when in the “Edit Lyrics” mode—and to repeat that each time.

<center>[translation of the word "lyrics" into the language of the song] + [Song name] + [Artist name] </center><hr>Example:

lyricsmeta data
How to Marketing No Comments